In what was a major surprise Moody’s upgraded India’s economy to Baa3 the first time after a gap of 13 years. Incidentally the last time the country received this rating was in 2004 under the leadership of Atal Behari Vajpayee. Though the rating is indeed recognition for the country considering the rapid strides made by the country in terms of economic development the timing has us caught by surprise considering the upcoming state elections in Gujarat which incidentally is Prime Minister Narendra Modi’s home state.

There was strong criticism which emanated from various quarters as GDP growth had infact slowed down in the past few quarters due to demonitization and GST implementation by the Government. However the Government maintained that these were bold steps and that these steps will begin to bear fruit in the coming years. However it is must also be remembered that any reforms such as these are also bound to have teething issues initially which resulted in a slowdown in the GDP growth. This led to a hue and cry from the opposition which alleged that the economy was not managed properly. Now the Moody’s upgrade is a vindication that these steps are likely to power the economy going forward. 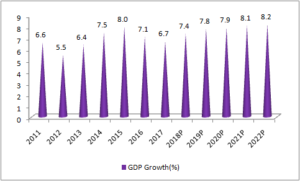 The Moody’s upgrade is underpinned on the expectation that continued progress on economic and institutional reforms will, over time, enhance India’s high growth potential and its large and stable financing base for government debt, and will likely contribute to a gradual decline in the general government debt burden over the medium term.

Incidentally India’s rating in Ease of doing business has also been increasing rapidly with the World Bank acknowledging that it’s getting easier to do business in India, with Asia’s third-largest economy jumping 30 places to rank 100th in the latest ranking released last month. Earlier this week, Pew Research Center said PM Modi remained a popular leader and public confidence in the economy and the overall direction had improved.

Moody’s has specifically cited the goods and services tax, which it said will promote productivity by removing barriers to interstate trade, improvements to the monetary policy framework, measures to clean up non-performing loans, and efforts to bring more areas into the formal economy.

However the most important measure taken by the government is the decision to recapitalize Public sector banks. These banks were reeling under high NPA’s which were left over by the previous government. These banks were struggling in the past few years and were reporting high provisions in its balance sheet. There were several banks which were put under course correction with a restriction on lending. While several factors led to asset quality issues the decision to recapitalize these banks to the tune of Rs.2 Lakh crore is a major initiative towards improving the capex cycle which had slowed down. Incidentally it is the Public sector banks which were major lenders to the corporate sector and the contribution of it can be gauged from the income derived by these banks from the corporate loan book in the previous years. While the private sector’s asset quality remained robust it must also be remembered that it is due to the fact that they restricted their lending to the corporate segment and focussed on the less risky retail lending. Thus the recapitalization will enable the country to increase its lending by the Public sector banks to the corporate segment which were subdued in the past few years due to asset quality issues. This increase in lending by the Public sector banks to the corporate segment will also improve the capex cycle which will power the country’s GDP growth. 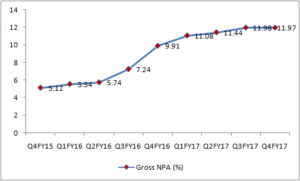 Moody’s expect the structural reforms undertaken by the government to power its GDP growth in the range of 8-10% in the coming years. The IMF projects India to overtake Germany in 2022 as the world’s fourth-largest economy, displacing the UK from the top five.

As per the central Statistics Office, India’s per capita net national income, which is the gauge for measuring living standards, grew 10.4 per cent in FY17 to $1,591 from $1,440 during FY16. The growing purchasing power and rising influence of the digital media have enabled Indian consumers to spend more.

India’s private consumption expenditure is also expected to grow at a CAGR of 7 per cent from $1.3 trillion in 2016 to about $2 trillion by 2022 with major consumer spending likely to come from the food, housing, consumer durables, transport and communication sectors.

India’s Inflation is expected to remain stable with the RBI’s policy stance being “neutral” with the objective of achieving a medium term consumer price index (CPI) inflation rate of 4 per cent within a band of +/-2 per cent. The country’s inflation averaged 4.5 per cent in FY17 which has resulted in Asian Development Bank lowering its inflation target for the country at 4% as against 5.2% earlier. 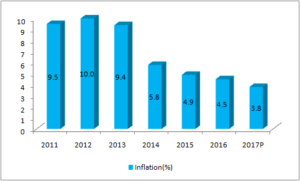 India’s exports grew 4.7 per cent to $274.7 billion during FY17 from $262.3 billion in FY16, which is the highest growth recorded in the last five years. This growth was achieved due to  revival of growth and demand in developed economies apart from a surge in commodity prices in 2H17 which resulted in a boost to Indian shipment.

India’s foreign exchange reserves stood at approximately $398 billion as on October 6, 2017 as compared to $372 billion in the previous year. Global investors are taking advantage of high real interest rates and a strong rupee, which has gained more than 6 per cent in 2017 till September against the US dollar with the rupee being the best-performing emerging market currencies in 2017.

The country has high forex holdings which would help the rupee withstand any volatility as the Federal Reserve expected is expected to reduce the US stimulus albeit gradually. The increasing foreign portfolio investment (FPI) and FDI (Foreign Direct Investment) in the country is likely to drive the rupee going forward. 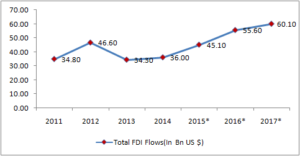 The stock markets gave a thumps up to Moody’s upgrade with the Nifty ending the day with gains of about 0.67%. The market is likely to see renewed vigour and is all set to rally further as money waiting in the sidelines anticipating a correction will feel left out and start pumping money which will increase overall sentiment in the stock markets. With economy being projected to grow between 8-10% with the country being projected to be the fourth largest economy globally we see Indian stock market hitting record high’s in the months and years to come.