Government has made many changes in it’s 23rd GST Council meeting which was held at Guwahati on 10th November 2017.

Following are some key points of GST council 23rd meeting done by Ministry of Finance. Important features of these press releases are…… 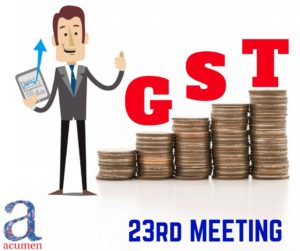 Taxpayers with annual aggregate turnover more than Rs. 1.5 crore need to file GSTR-1 on monthly basis as per following frequency

The GST council decision to lower rates on items in the consumer, light electrical and home building sectors, would be positive for companies like Hindustan Unilever, Nestle India, Asian Paints, Berger Paints., Titan Kajaria Ceramics, Somany Ceramics, Century Ply. With the easing of rates on many items we believe that the irritants in the implementation phase has been taken care of to a large extent. We also believe that further rationalization of rates is likely to come in the forthcoming meetings. The pain suffered by SME is likely to subside and things will start to look up for the segment which had been the worst affected. With this rationalization the teething problems which affected our GDP growth is likely to ebb and drive the economy northwards in the coming quarters.